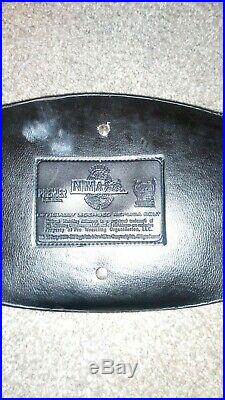 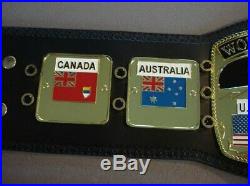 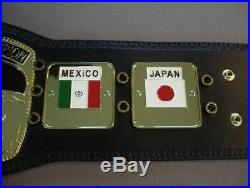 It's the belt that defines pro wrestling. Its lineage has been traced back from the very first World Championship.

It has been held by wrestling's biggest stars, and has been defended throughout the world. This was a 2009 "Mega deluxe belt" simulated leather strap measures 56.25 inches long and can fit up to a 50 inch waist.

The center plate measures 7.5 inches tall by 11 inches wide and the belt weighs in at 5.95 pounds. This is the OLD mega deluxe, so i do believe it has 2mm plates.

(NWA) National Wrestling Alliance World Heavyweight Championship adult sized replica belt. The legendary 10 pounds of gold made famous by Ric Flair. These are official Size and Weight!! They are officially licensed by NWA and Reggie Parks and are brought to you by Premier Replica Belts. This belt features GROMMETS and SIMULATED DIAMONDS just like the ORIGINAL!!! The belt comes with 2 mm thick plates as all Mega Deluxe belts do and has DEEP engraving/etching to the plates. Also as shown in the pictures is has the amazing 3D Dome Globe!! Premier is known for their unmatched quality, trust me when I say this blows the first replica out of the water. Belt weighs in just over 6lbs, which is great weight for a belt. The strap is very floppy and soft!

The belt has some plating imperfections and it has a few small surface marks that any and all replica belts get over time. Now I will say this, I also have the new 4mm mega deluxe title as I worked for the nwa, and did for years, this belt is good. But the bran new one is better, the price is also how much for the bran new one? I have held the real nwa world title many times, and in 2009 this is the best you were going to find or get. So the world title has been on display since November 2017 on my mantle.

The belt is all but new with some minor imperfections as it is ten years old. Lets skip to 2019 (January) I got hurt in a car accidents, four herniated discs, and nerve damage. I have lived off of savings and cashed in my 401-k. I have a child to support, and I just want to see this go to a good home.

And with the debut of NWA Powerr this belt is only going to get more popular again now that the nwa is coming back to life. Here is video of the belt, but mine the one for sale is 2mm and NOT 4. It is the more rare first production run of maybe 250 titles? Not sure how I can find that out but this belt is rare, does not add value, just a cool factor. I have tried to be as open as I can.

The item "PREMIER NWA Championship Belt Adult Size deluxe #wwe #aew impact roh #nwapowerr" is in sale since Friday, October 11, 2019. This item is in the category "Sports Mem, Cards & Fan Shop\Fan Apparel & Souvenirs\Wrestling". The seller is "butler_citizen" and is located in Cabot, Pennsylvania. This item can be shipped to United States.