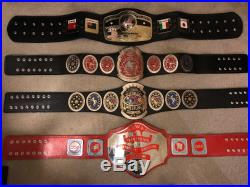 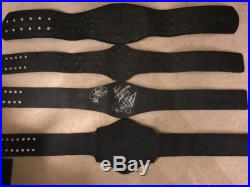 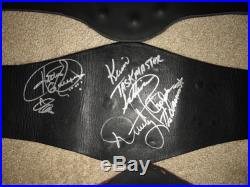 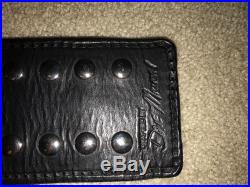 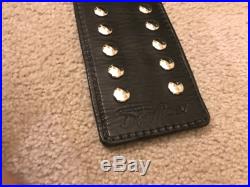 NWA WRESTLING FANS DREAM CHAMPIONSHIP BELT COLLECTION (Especially if you grew up in Florida). This is your lucky day. You have the opportunity to own four of the most iconic wresting belts of all time. Let me start by saying they are amazing quality, in great shape and on soft and quality leather. However -- the QUALITY of each belt is quite different.

And only one (the Florida belt is a Millican). They are very high quality. I know that there a lot of you out there that know way more about these than I do but i'll do my best to be accurate. These are on consignment so we are limited to negotiate until we get his approval approval. So please be patient on offers -- though I suspect he will be very responsive - and he has given us a little room to negotiate on his behalf.

Honestly, I think he is having a hard time letting them go - thus the high starting price. But he did say he would consider reasonable offers. They are only available as a set - but again reasonable offers WILL be considered. If you are still reading this you know what the belts are and were so I will just describe the quality. The NWA Championship Belt - This is most basic in terms of quality.

Its clearly a very nicely re-leathered version of the plates from one of the early NWA licensed belts - He made a point for us to confirm these are NOT the Figures Inc version plates. It really actually looks very impressive in person -- but thats what it is.

Know as "Ten Pounds of Gold" and made famous by Ric Flair, Harley Race, Dusty Rhodes and other wresting legends. The NWA Southern Championship Belt - This one is AMAZING. The leather work is superb. This is a very high quality belt and I would put it up there with a Millican any day.

The NWA Florida Championship Belt - This is the Millican. If you know who that is, that speaks for itself. People wait sometimes years for the chance to own a belt made by Dave Millican and this belt is SUPER SUPER rare. The quality from the plates to the leather is superb.

And this one comes with a bonus. The NWA Television Championship - I love this belt. The leather is super soft and supple and its very well made. The plates are thick, but the engravings are not as deep as the Millican or Southern belt. Then again, I don't know how deep they were in the original and therefore how accurate it is.

It is the most worn of the bunch, but I think thats cool personally, makes it feel ring used, but we are NOT claiming is was. I remember seeing it on Arn Anderson almost every Saturday on TBS as a kid.

Please reach out if you have questions, but I put most of my knowledge in this post -- but by all means ask and I'll do my best to answer. And AGAIN -- at least right now, he will not break them up - so that is one question you don't need to ask - but if that changes we will update it on the post. Personally, I think if he doesn't get rid of them all he may just keep them. Home they find a good home! The item "NWA Wrestling Championship Belt Collection / Dave Millican, WWE, WCW, TNA" is in sale since Saturday, April 22, 2017. This item is in the category "Sports Mem, Cards & Fan Shop\Fan Apparel & Souvenirs\Wrestling".

The seller is "divergentthinking2" and is located in Los Angeles, California. This item can be shipped to United States.